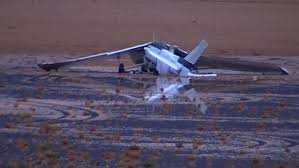 CEDAR CITY, Utah – The Iron County Sheriff’s Office on Tuesday identified the two men who died in a small-aircraft crash on Aug. 2.

The victims were Darwin Mao, 52, and Richard Essex, 63. Both men were from Las Vegas.

The plane struck a communications tower approximately 5 miles away from the Cedar City Regional Airport. The plane took down the tower when it crashed, and both men were pronounced dead on the scene.

The aircraft was a World War II-era plane, authorities said.

The investigation will continue with the Federal Aviation Administration and the National Transportation Safety Board.