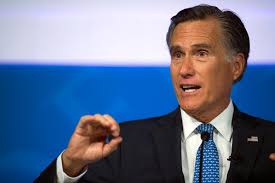 Trump said all 197 Republicans in the House voted against the impeachment “hoax” but in the Senate the vote was “52 and a half to a half. That was Mitt.”

Romney voted to convict Trump of abuse of power and to acquit him of obstruction of Congress, the only Republican to do so.

“But that’s OK. I’m no longer angry at Mitt because he’s being very nice on the Supreme Court. He’s doing the right thing. I just want him to do the right thing,” Trump said.

On Tuesday, Romney, R-Utah, said he would vote on a replacement for Justice Ruth Bader Ginsburg should a nominee reach the Senate floor.

“The historical precedent of election year nominations is that the Senate generally does not confirm an opposing party’s nominee but does confirm a nominee of its own,” he said in a statement Tuesday.

The Constitution gives the president the power to nominate and the Senate the authority to provide advice and consent on Supreme Court nominees, Romney said.

“Accordingly, I intend to follow the Constitution and precedent in considering the president’s nominee,” he said. “If the nominee reaches the Senate floor, I intend to vote based upon their qualifications.”

In April, Trump acknowledged keeping Romney off a task force for reopening the U.S. economy amid the coronavirus pandemic because he has a grudge against him.

“Yeah, it does,” the president said in response to a question about whether he holds a grudge over Romney’s impeachment trial vote.

Trump invited 70 senators, including all 52 of Romney’s GOP colleagues, to serve on the bipartisan task force

Herbert: ‘Not really a benefit’ for mask mandates in rural counties