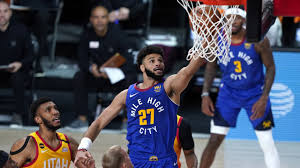 August 20, 2020 — LAKE BUENA VISTA, Fla. — The Jamal Murray-Donovan Mitchell duel will be settled in the first Game 7 in the bubble.

Murray extended his torrid run with 50 more points, leading the Denver Nuggets to a 119-107 victory over the Utah Jazz on Sunday night.

Murray had his second 50-point game of the series to equal Mitchell, who finished with 44 in this one. No player has ever had more in an entire postseason.

They will go at it one more time Tuesday night, with the winner advancing to face the Los Angeles Clippers, who finished off the Dallas Mavericks in six games on the same court a few hours earlier.

Murray and his teammates are trying to become the 12th team to rally from a 3-1 deficit to win a series and the first since 2016, when the Cleveland Cavaliers completed the only one of those comebacks that came in the NBA Finals.

“They believe in me, I believe in them and we’re trying to be this 12th team to come back from down 3-1,” said Murray, whose right sneaker had a picture of George Floyd and his left Breonna Taylor, two Black people killed by police this spring.

Mitchell was disappointed the Jazz had missed a chance to wrap up the series in Game 5, but understands the interest in seeing he and Murray square off in the ultimate contest.

“As a fan perspective I see it and I respect it, but I can’t tell you as a player that I want to play Game 7 if we’re up 3-1,” he said. “I don’t think anybody wants to do that but we’re here, so play the hand that you’re dealt and we’re going to go out there and execute and do what we’ve got to do.”

The Nuggets won the opener, but the Jazz won the next three games and were in good shape to finish it in Game 5, holding a 15-point lead in the third quarter.

“Last game he got to the rim and we wanted to take that away. Other than trapping him, we’re trying to make him hit contested shots and he’s doing that,” Utah coach Quin Snyder said.

Mitchell also hit nine 3-pointers and increased what was the NBA’s top-scoring average in these playoffs at 37.6 points per game.

In the fourth quarter alone, Murray outscored Mitchell 21-17, helping prevent the Jazz from ever getting close enough to have a real chance of finishing the series.

Mike Conley had 21 points for the Jazz, but Rudy Gobert and Jordan Clarkson were each only held to 11.

A seventh game between the third-seeded Nuggets and No. 6 Jazz seems fitting. Though Denver won all three meetings during the regular season, the total margin was just 11 points.

The Jazz came into the day topping all teams in the postseason in field goal percentage and 3-point percentage, and ranking third in scoring with 121.8 points per game. And they looked early as if they would eclipse all those numbers.

The Nuggets started 5 of 6 but were just trying to keep up as the Jazz hit their first seven shots. Conley made a 3-pointer from the corner while falling down to beat the shot clock and then later banked in one, keeping Utah rolling even on the possessions when Denver defended well.

But the Jazz left plenty of points on the board by going 3 for 9 on free throws, so their lead was only six. Murray then heated up on his way to a 14-point second quarter and Utah shot just 4 for 16 as the Nuggets surged to a 10-point advantage before taking a 61-56 lead to the locker room.

Nuggets: Gary Harris got his first action in the series after recovering from a right hip muscle strain. He finished with four points. … Torrey Craig walked off the floor with a towel covering his face after being hit while battling for rebound position in the third quarter but stayed in the game after the previous play was under review.

Michael Jordan (twice), Wilt Chamberlain and Allen Iverson are the only other players with two 50-point games in the same postseason.

It will be the third straight Game 7 for the Nuggets, who beat San Antonio before losing to Portland last year.

“To be honest, it’s Game 7 for the last two games for us. It’s win or go home for us,” Jokic said. “That’s why we’re playing a little bit relaxed. We have nothing to worry about. If we lose we’re going to home. That’s why the energy is really high. We just need to give the effort. Don’t give up on the plays. Rebound. Just help each other. That’s why we’re playing really good right now.”