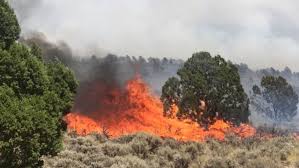 UTAH COUNTY, Utah, June 20, 2020 (Gephardt Daily) — A new Utah wildfire has been reported late Saturday afternoon, and officials say the potential for the fire to spread is low.

Named the Baldy Fire, it was reported at 5:20 p.m. and is less than an acre in size.

According to Utah Fire Info on Twitter, a helicopter is dropping water on the fire while ground resources hike to it. The smoke is visible from Pleasant Grove and Lindon, the tweet says.

The cause of the fire is still to be determined.