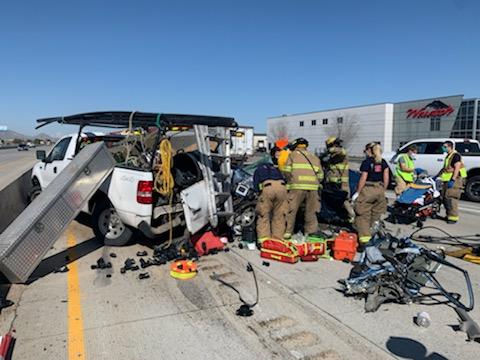 WEST VALLEY CITY, Utah  – The fatal collision on SR-201 Monday morning was caused by a ladder that had fallen off a truck, according to Utah Highway Patrol.

According to Sgt. Nick Street, Utah Highway Patrol. the crash happened just before 11 a.m. at MP 10 near 4100 West when three vehicles were all headed west at the same time, one truck, slightly ahead of the others, lost a ladder from the rack on the bed of the vehicle and the driver stopped in the fast lane of the freeway.

The two vehicles swerved to miss the ladder when the driver of one car hit the back of the truck. The driver in that car did not survive the crash.

Street said the third vehicle was a minivan with two occupants that got clipped during the collision. The minivan then rolled. Neither occupant of the minvan were injured.

Street said the victim who died is a man in his mid twenties. His identity has not been released.

UHP encourages those hauling materials in external locations on their vehicles to consistently check and double check that those materials are properly secured.

“Rubber bungee-style tie downs don’t last forever, they rot over time due to environmental exposure and must be replaced often. For this reason, a more secure method of tying down externally secured items should be utilized,” said Street. “Unfortunately, road debris is a hazard State Troopers see daily.”

In this incident, Street said road debris contributed to a fatal crash and motorists should expect to encounter debris on our state’s roadways.

“Maintaining a speed at or below the posted speed limit, ensuring at least two second’s following distance and looking down the roadway 12-15 seconds ahead of where you’re currently driving, are all ways to provide oneself more time to react to situations like road debris,” said street.”

Westbound is expected to be closed until around 4 p.m. Monday. Please avoid the area.