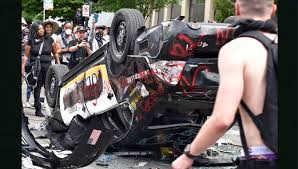 SOUTH SALT LAKE — Two South Salt police vehicles were heavily damaged over the weekend by a vandal or group of vandals.

The vehicles were parked at officers’ homes in Salt Lake City and South Jordan. Each had their rear windows broken or shattered and graffiti scratched into the bodies of the vehicles and on the windows.

In Salt Lake City, police say the vandalism happened in the Avenues. On the driver’s side, the entire length of the vehicle was “keyed,” according to police, and derogatory comments toward police were written on the side and rear windows.

Whether the same person or group of people were responsible for each car vandalism was still under investigation Monday. But South Salt Lake police spokeswoman Danielle Croyle said given the fact that two cars from the same police agency parked on opposite ends of the valley were vandalized on the same night, police believe the actions were “intentional and purposeful.”

“This type of behavior is both unacceptable and criminal. Let us not forget these brave men and women put their lives in harms way everyday to protect you and your families while you sleep and yet criminals continue to come to their homes to create havoc. We need to stand together as a community.”

The group used the hashtag #DefendThePolice in their effort to rally the public for support.

As of Monday, there have been no arrests or suspects named.

Custodians: unsung heroes of the pandemic

Man, 56, in critical condition after being struck by vehicle in West Valley