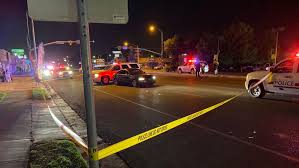 SOUTH SALT LAKE, Utah – A UTA officer is in stable condition after being struck by a car while trying to save a dog in the road.

The auto-pedestrian crash happened late Tuesday the area of 2700 South and State Street.

Witness Mark Pando said an unleashed dog was walking with its owner when it suddenly went into the road. The UTA officer stopped her vehicle and attempted to get the dog when she was struck by a black Audi.

“Tonight I was sitting at the UTA bus bench when all of a sudden, a black dog came running up to me,” he said.

The dog’s owner then called the dog, and it began to run back to her. That’s when the dog ran into the street, the officer stopped to help.

“She started walking towards the east side, then all of a sudden a black Audi comes around the side and hits her,” Pando said. “And then she flipped, and she landed on her back.”

South Salt Lake Police Chief Dwayne Ruth said the officer was conscious and breathing when she was transported to the hospital. She was initially in critical condition, but she has since been upgraded to stable condition.

“You have to be very aware of when you see police lights,” he said. “Regardless of what lane they may be in. Often times (an officer’s) job takes them away from their vehicle.”

Police said the driver was initially taken into custody on suspicion of driving under the influence. A warrant was issued for a blood draw.

The driver was ultimately not arrested. Charges are pending with the district attorney’s office.

No identities have been released.

Utah Football To Continue Practicing Despite Cancellation Of Fall Season