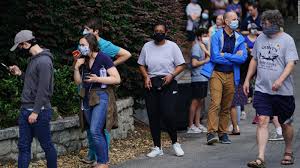 HOURS-LONG VOTING lines, staffing shortages, delayed openings and malfunctioning voting machines greeted voters in Georgia Tuesday in what could be a sign of trouble for the general election in November.

Georgia is the latest state to experience widespread issues as it holds its primary in the middle of the coronavirus pandemic. But the issues go beyond the problems expected because of an outbreak.

Election observers, voting rights advocates and local officials are reporting numerous issues with in-person voting in four Georgia counties, though Fulton County, the most populous county that includes Atlanta, has borne the brunt of it. But officials say the problems aren’t limited to the metro areas and are happening across much of the state.

Georgia is one of five states to hold primaries on Tuesday and while other states have seen various issues including South Carolina and Nevada, Georgia has faced extensive challenges since polls opened at 7 a.m., causing alarm among local officials and activists who worry about election preparedness by the November election.

Kristen Clarke, the president and executive director of the Lawyers’ Committee for Civil Rights Under Law, told reporters on a Tuesday afternoon call that if the primary is a dry run for the fall, then “Georgia gets an F today.”

Like other states who have held elections during the pandemic, Georgia voters experienced long wait times – some that lasted two to four hours – due to social distancing guidelines, shortages in the number of poll workers and a smaller number of open polling locations. Helen Butler, executive director of Georgia Coalition for the People’s Agenda, said on the press call that at a polling location in Gwinnett County, voting machines didn’t arrive until 11 a.m. – a four-hour delay from when it should have opened.

But the state also faced some unique problems due to the implementation of new voting systems and questions over whether volunteers were sufficiently trained to operate them prior to the primary. The new system has a multi-step process where a poll worker checks voters in through an iPad, voters print out a ballot through a touchscreen device and then the ballot is scanned through an optical scanning machine.

Clarke and other voting rights activists who were on the ground on Tuesday reported that some voting machines malfunctioned and that there was an “insufficient backup” of paper ballots for when equipment was down. However, they noted that it’s unclear how much of the malfunction could be attributed to faulty machines or the lack of adequate training for poll workers.

In addition, the pandemic caused more absentee ballot requests but a number of voters never received a ballot in the mail. Clarke said that likely caused some locations to have become more crowded since voters had to instead cast an in-person ballot if they still wanted to vote.

The Georgia Secretary of State’s office in a statement denied any “actual equipment issues” and placed the blame on counties for “engaging in poor planning, limited training and failures of leadership.”

And activists on the ground noted multiple issues at the state and local levels, arguing that voters were unable to find concrete information.

Aunna Dennis, the executive director of Common Cause Georgia which is the state chapter of a nonpartisan watchdog group focused on voting rights, says that multiple polling locations moved within the 48 hours before the election with little warning and didn’t provide proper signage to indicate the changes in locations for voters. And when machines stopped working, some locations only had 20 emergency and provisional ballots on hand.

“For us, those are voter suppression tactics at work,” Dennis says. “We all need to sit down to better plan, to create an emergency preparedness plan to make elections be more efficient.”