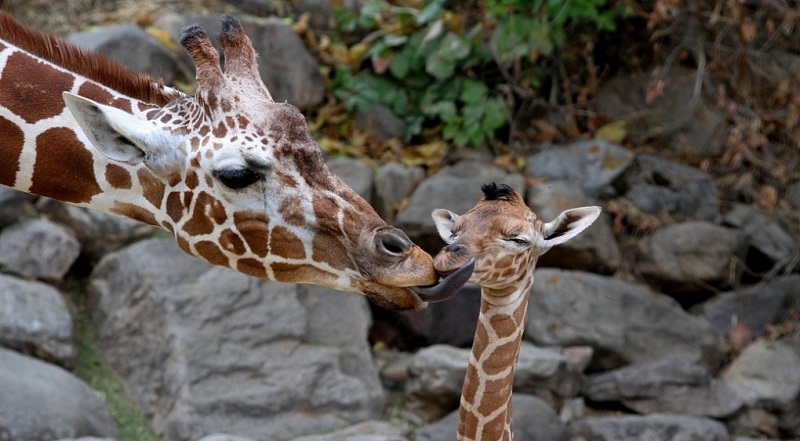 Utah – The Hogle Zoo in Utah welcomed a healthy female giraffe on Saturday.

The first offspring of Stephanie, a 4-year-old giraffe, was born at around 11:40 in the morning, according to zoo officials.

Riley, the father of the calf, was a beloved 17-year resident giraffe who died in December. Riley’s child with Stephanie was Riley’s last offspring. Riley has already fathered six further giraffe calves.

“Stephanie was kept under close observation and under veterinary prenatal care during the 15-month pregnancy. As a first-time mom, or ‘dam,’ we took extra precautions and preparations to ensure a soft landing area was ready for the calf,” said Bob Cisneros, associate director of Utah’s Hogle Zoo Animal Care.

“The birth occurred as we hoped, with staff observing by security cameras and not interfering with the natural process,” Cisneros said. “We are grateful to welcome her to our herd, while also promoting a genetically healthy giraffe population for species conservation.”

Labor on Saturday lasted approximately three and a half hours, according to a news statement. The newborn calf was 144 lbs. and around 6 feet tall.

“Within the next 48 hours we will be looking for natural signs of maternal bonding, healthy nursing, appropriate growth and development, and integration with the rest of the herd and animals in our African Savanna,” Cisneros said.

According to officials, a private donor will choose the calf’s name, which will then be revealed on the zoo’s social media pages. If everything goes according to plan, visitors may be able to view her on display as soon as one to two weeks from now.

A first-grade teacher in Magna accused of criminal sexual assault