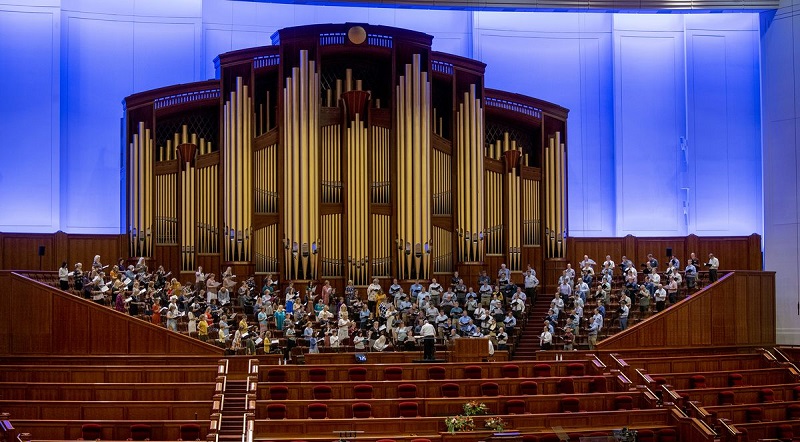 Salt Lake City, Utah – The Tabernacle Choir will return to live broadcast performances this Sunday, October 24, after over a year and a half

The last broadcast was aired on March 8, 2020, right before the nationwide shutdown. The live broadcasts are part of a 93-year-old choir tradition.

“Thanks to the success of The Tabernacle Choir’s COVID protocols and building on its experience singing at the October general conference sessions, the entire Choir—as well as the Orchestra at Temple Square and Bells at Temple Square—will perform in-person for the first live “Music & the Spoken Word” program in 19 months!” officials say.

The broadcast will originate from the Conference Center on Temple Square. According to officials, a public audience will not be introduced until after 2022. The broadcasts will don some new changes such as an opening sequence featuring a new logo for “Music & the Spoken Word.”

Four new songs will also debut including Mack Wilberg’s new composition, “We Thank Thee, Lord, for This New Day,” new arrangements of “Tuya es la gloria (To Thee Be the Glory),” (sung in both Spanish and English) and “Now Thank We All Our God,” along with Richard Elliott’s new organ solo, “Praise and Thanksgiving.” Future broadcasts will also include new music by Wilberg and associate music director Ryan Murphy.

The Tabernacle Choir resumed rehearsals after a 19-month hiatus, earlier in September. Mandatory proof of vaccination against COVID-19 along with testing prior to rehearsal was put in place. The efforts were part of a “Multi-Layer COVID Protection Plan” to ensure the safety of all staff and choir members.

In early October, the choir performed live during the 191st Semi-Annual General Conference.

“As we all continue to lean forward, the Choir organization is working hard to make sure that this step of in-person singing continues to be successful through our COVID protocols,” officials say. “It is hoped that as soon as conditions allow, in-person audiences will once again be invited to join the Choir for its performances.”

Hiker with chest pains rescued in the hills above Cedar Hills

As part of annual tradition, thousands of sheep herded through Box Elder County