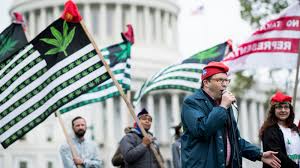 The U.S. House voted Friday to federally decriminalize and tax marijuana, in what supporters say would be a step toward more research into the drug that is legal for medical use in Utah.

The bill, formally called the Marijuana Opportunity Reinvestment and Expungement Act (the MORE Act), passed mostly along party lines in the Democrat-controlled House by a 228-164 vote.

“That approach is better for individuals, law enforcement, courts, communities and taxpayers, relieves prison overcrowding and helps put people on a path to self-reliance,” McAdams said in a statement to the Deseret News.

Decriminalization would remove marijuana from the federal Schedule I list of drugs — which includes heroin, LSD and ecstasy. McAdams said this would facilitate “medical research into cannabis’ potential benefits and harm.”

The House bill includes a “5% sales tax on marijuana products to fund programs aimed at assisting people and communities harmed in the so-called war on drugs, such as job training and legal aid” and “would require federal courts to expunge prior marijuana conviction,” according to The Associated Press.

A spokeswoman for Curtis said they had no comment about the bill and Bishop, who is retiring after this session, could not be reached.

In his statement, McAdams said the bill would not change Utah’s marijuana law and preserves states’ rights to determine decriminalization under state statute. The congressman added that he “supports Utah’s prerogative to decide on decriminalizing marijuana in the state.”

The vote was the first time either the House or Senate had ever supported the legalization of cannabis. The measure is not likely to be considered in the Republican-led Senate with some lawmakers calling it a distraction to more pressing issues.

Utah Gov. Gary Herbert’s Communication Director Anna Lehnardt said the governor’s office usually waits until legislation makes it through the House and the Senate before commenting.

Utah voters approved a ballot initiative in November 2018 legalizing doctor-approved marijuana treatment for certain health conditions. State lawmakers the next month replaced the measure with a law they say puts tighter controls on the production, distribution and use of the drug. Utah’s Medical Cannabis Act then went through multiple changes in subsequent legislative sessions before the program launched this past March.

House Minority Leader Kevin McCarthy made light of Friday’s passage of the MORE Act on his official Twitter page, accusing the Democratic majority of ignoring additional pandemic legislation for “cannabis and cats.”

The “cats” comment referred to the Big Cat Public Safety Act — which would more closely regulate the ownership of large cats like lions and tigers — that also passed the House Friday. Utah’s Curtis joined McAdams’ “Yea” vote on the bill, with Bishop voting against.

Coronavirus stimulus talks appeared to make some progress this week, after a bipartisan group in the Senate called the Problem Solvers Caucus proposed a $908 billion relief plan. The aid appears to be a compromise between two different opinions on relief in a divided Congress.

The House did pass a $3 trillion pandemic aid package — the HEROES Act — in May and a trimmed $2 trillion version of the bill in October, but each met resistance in the Senate, where Majority Leader Mitch McConnell, R-Ky., has insisted on $500 billion “targeted” aid.

McAdams’ spokeswoman Alyson Heyrend said the MORE Act would likely not get a vote in the Senate during this session.