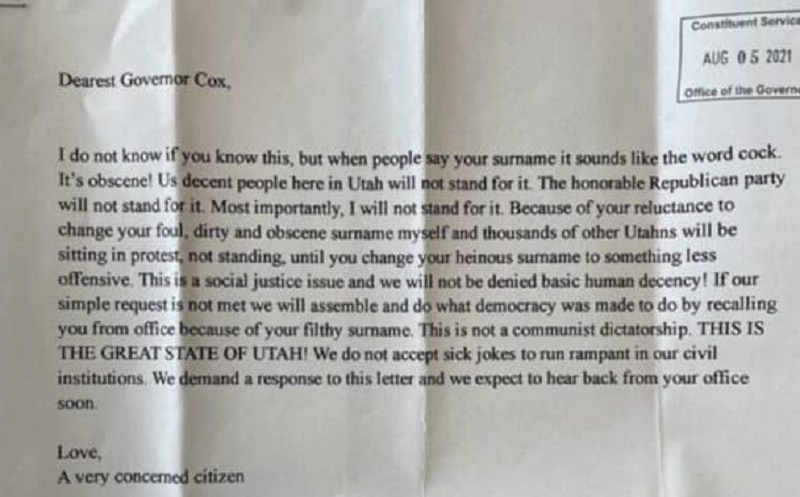 Salt Lake City, Utah — “A very concerned citizen” has brought it to the attention of Utah Gov. Spencer Cox that his surname sounds like slang for part of the male anatomy.

“Because of your reluctance to change your foul, dirty and obscene name, myself and thousands of other Utahns will be sitting in protest, not standing, until you change your heinous surname to something less offensive,” V.C. Citizen continues.

“This is a social justice issue and will not be denied basic human decency!” the missive continues. “If our simple request is not met we will assemble and do what democracy was made to do by recalling you from office because of your filthy surname.

“This is not a communist dictatorship. THIS IS THE GREAT STATE OF UTAH! We do not accept sick jokes to run rampant in our civil institutions. We demand a response to this letter and we expect to hear back from your office soon.”

The governor’s initial, informal response to the letter also appears:

“Really grateful for the criticism and constructive feedback I get from constituents that demand I… *checks notes* …change my name?”

Member of the Utah firefighting community has passed away