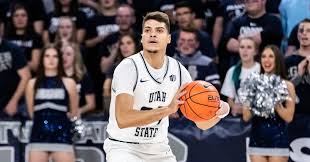 LOGAN – Utah State opened the Mountain West portion of its schedule in emphatic fashion Monday night as the Aggies rolled past San José State 107-62 at the Dee Glen Smith Spectrum.

Justin Bean led the way for Utah State (4-3, 1-0 MW) as the junior forward had a double-double with 16 points and 11 rebounds. Brock Miller chipped in 14 points on 5-of-9 shooting from the field, including 4-of-7 from 3-point range.

“That’s a good W for the Aggies, in the first game of conference play,” said Utah State head coach Craig Smith. “It’s always nice to get out to a good start. We had a great team effort, we played very hard and very disciplined for 40 minutes. They can put some pressure on you, especially with (Richard) Washington, the third-leading scorer in the country. He kind of got going late in the second half, and Seneca Knight is a returning all-league guy. They’ve got some guys that can do things.”

Two other Aggies scored in double figures as Marco Anthony had 12 points and Steven Ashworth added 10 points off the bench, helping the Utah State reserves pour in a season-high 51 points.

Washington led all scorers in the game with 20 points, while Sebastian Mendoza added 11 for the Spartans (1-3, 0-1 MW).

All 15 players who dressed for the Aggies played at least two minutes in the lop-sided affair, and 12 of them scored at least three points. Freshman guard Rollie Worster dished out a game- and career-high seven assists, helping Utah State tally a season-high 27 helpers on 43 made baskets.

“I loved how we played on both ends of the floor,” Smith said. “We really shared the ball on the offensive end. Our offense usually takes a little longer to get up to speed and catch up to the defense early in the year. It’s Dec. 21, but I thought we really played together. We had 27 assists and nine turnovers, and it was everybody sharing the ball, moving the ball, playing for each other in the middle game, inside game, outside game. It was exciting to see. It was a great team effort.”

The Aggies owned the glass to the tune of a 59-36 edge. Besides Bean, sophomore center Trevin Dorius also grabbed double-digit boards with a career-high 10 rebounds. He finished two points shy of a double-double.

“We came out with the right mindset today, and really, all week,” Bean said. “We were really good with our scout and our prep. Starting off conference play, you always want to start out with a win and come out with an edge. We did that tonight. We shared the ball, we played the most connected we have all year, and didn’t turn it over as much. It felt really good to see everyone get an opportunity to come out and play their best, and start off on the right note in conference play.”

“We got outrebounded tonight and we didn’t make our free throws,” said SJSU head coach Jean Prioleau. “Utah State played a lot more physical than we did, and we couldn’t answer the call on that. The toughness and the effort showed up in the offense rebounds in the first half. That’s basically where the game got away from us. They beat us pretty good in both halves.”

Utah State has now won 29 straight home games against San José State and improved to 65-22 all-time against the Spartans, including a 37-4 record in Logan.

These same two teams will square off again on Wednesday night at 7:00 at the Spectrum.