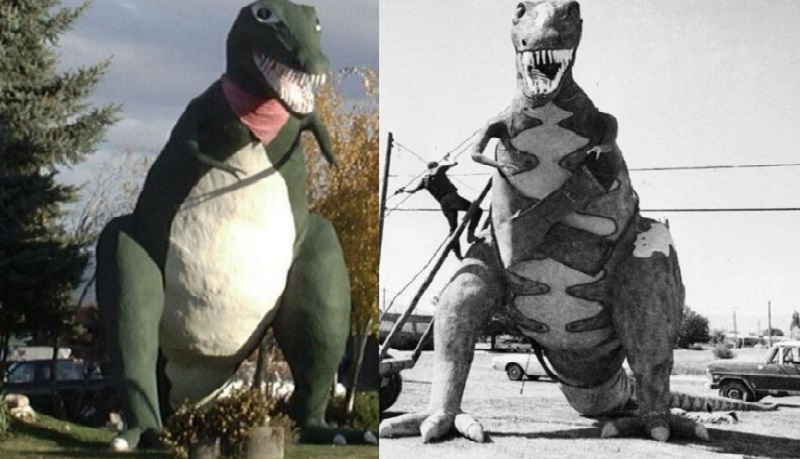 Vernal, Utah —A dinosaur statue that has been an iconic landmark in Vernal for more than 50 years is underway to be saved and repaired.

The city recently opened an online survey about what should be done with “T-Rex” — a large, green dinosaur that stands on the side of U.S. Highway 40.

In 1969, the figure was designed and built by George Millecam to display outside his local business, the Dine-A-Ville Motel.

According to a page on the Vernal City website, since then, however, poor Rex has “fallen into disrepair and needs to be resurfaced and painted”.

Most of the survey respondents expressed a desire to repair the iconic dinosaur — as well as “a willingness to donate to the effort,” according to the city.

The city council said it supported this, and “Project Save T-Rex” was launched. Last week, a GoFundMe page was set up to raise the funds necessary to restore T-Rex to its former majestic and ferocious glory.

Donors have pitched in more than $10,000 after only four days. The goal is $30,000. The funds will go to Charitable Friends of Ashley Valley, a registered nonprofit, on behalf of the city.

“If donations exceed the goal, the funds will be used for landscaping on T-Rex’s island and safety measures,” the page read.

Vernal is one of the closest populated areas to Dinosaur National Monument, and one of the last places people might stop if they’re traveling there from the west.

Pleasant Grove woman to serve up to 10 years in prison

Utah Miss Amazing: People with disabilities have every ability to reach for their dreams