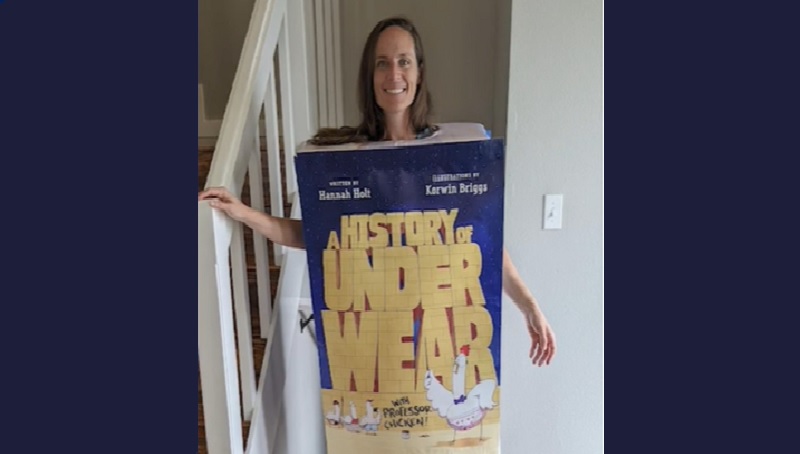 St. George, Utah – Hannah Holt, an alumna of Brigham Young University and a celebrated author, wants to break records. Holt will be one of many athletes competing in the St. George Marathon on Saturday, October 1.

Holt will be dressed in one of her books, “A History of Underwear,” rather than in her athletic best.

While setting a world record is Holt’s main goal, she also wants to raise awareness about dyslexia. According to the Yale Center for Dyslexia and Creativity, 20% (1 in every 5) of the population has dyslexia, a learning problem. Due to the dearth of knowledge and resources, Holt came up with the idea to combine her love of marathon running with educating the world about dyslexia.

Holt will collaborate with Reading for Life Southern Utah, a nonprofit dedicated to creating resources for dyslexic readers in southern Utah, so she won’t be acting alone in her objective.

“At first, running a marathon in a costume seemed like a fun idea,” Holt said. “The more I think about it and prepare for it, the more I realize it’s probably going to be pretty miserable. Even so, anything that helps bring more awareness to dyslexia is worth it!”

With October being National Dyslexia Awareness Month and Holt’s goal at a world record, the race is even more significant for both her and Reading for Life Southern Utah.

“We are proud to be part of Holt’s attempt at a record-setting achievement,” said Melissa Miller, co-founder of Reading for Life Southern Utah. “Her dedication and passion in the reading community is admirable and we are thrilled she is putting so much effort into bringing dyslexia to the forefront.”

With a five-hour anticipated finish time for the St. George Marathon, Holt anticipates reaching the finish line at 12 p.m.

During a storm, scaffolding pulled from a structure in Salt Lake City

Following a threat, a family is concerned about the absence of security measures at the local high school