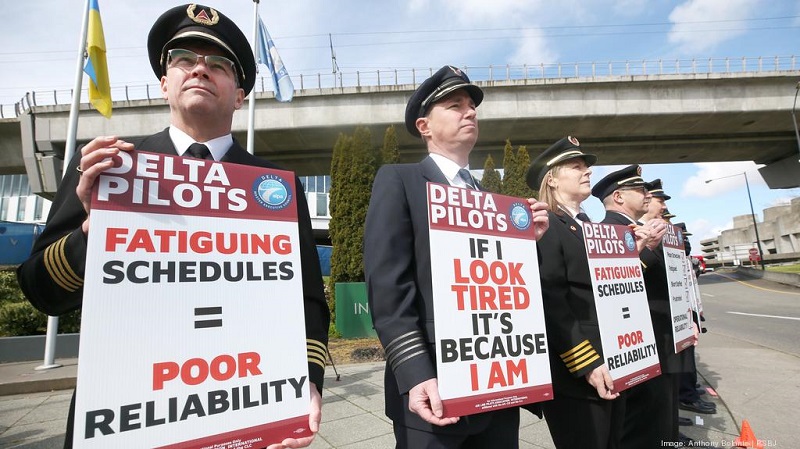 More than 100 off-duty pilots were on the Salt Lake City line, some holding signs threatening a strike, but mainly asking to have their voices heard.

First officer Reed Donoghue, a Delta who commonly flies the Airbus 220, hammered home the point of the picket that pilots want an industry-leading contract.

According to Donoghue, any new contract should focus on areas such as pay, retirement, and work rules; something he says has been driven home by recent scheduling issues plaguing the airline industry.

“We have worked record amounts in the last year in order to keep the operation running and help Delta through recovery,” Donoghue said. “It’s time for Delta management to bring an industry-leading contract to the pilots.”

The Air Line Pilots Association (ALPA) represents Delta’s 13,900 pilots. They posted on their Twitter earlier today that the current contract the Delta pilots are working under is six years old.

Brandi Schofield took a short, 45-minute flight from Boise into Salt Lake City on Thursday. “In this small plane, but yeah, it was, it was great, the pilots were great,” said Schofield.

After hearing about the pilots picketing out in front of the airport, she hopes everything gets resolved before she heads back to Idaho on July 29th. “Well, I hope I can get back,” said Schofield.

“We are on pace by September to do as many overtime hours as we did in 2019 and 2018 combined, so what we are saying today is it is time for Delta management to recognize that and come to the table with an industry-leading contract that we have earned.”

Even though both sides are at an impasse, regular negotiations between the pilots and the airline are ongoing.

In a statement, Delta officials said they hope to reach a quick agreement with the company’s pilots.”Our goal remains to continue providing Delta pilots with an industry-leading overall contract with the best compensation based on pay, retirement, work rules, and profit-sharing. We’re also committed to making sure the contract language supports our ability to run a world-class operation, maintain a strong balance sheet, and invest in our business for our customers and employees alike.”