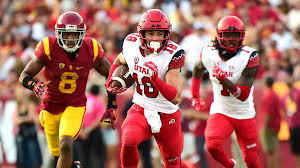 Orlando Uman and Simi Moala, both offensive lineman, were named to the All-Pac-12 second team along with defensive lineman Mika Tafua.

One of the Utes’ biggest stars, receiver Brittain Covey, was named to the second team on special teams as an all-purpose player.

Several other Utes were named to the honorable mention team, listed below.

The 2020 Utah football squad takes the field on Saturday at 1:30 p.m. MT on ESPN2 against the Arizona Wildcats.

Brant Kuithe, a junior from Texas, had a breakout season last year with the Utes and earned a spot on the All-Pac-12 second team.

Covey, a Utah Football fan favorite, heads into his junior season trying to avoid injuries that have plagued his career. He will be vital in the Utes offense after losing a handful of receivers.

The Utes’ offensive line is looking strong this season, which is good news to whoever the team decides to start at quarterback on Saturday.

You can see the entire Pac-12 preseason team picks here. The players who make the teams are selected by members of the media.