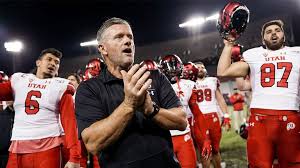 The extension runs through December of 2027, extending his current contract by four years.

“Kyle Whittingham has established a culture in the Utah Football program that not only achieves success on the field, but also in the classroom, the community and in the development of student-athletes for their future beyond their time on campus,” Harlan said. “This has been especially evident throughout the pandemic, as he has steadily demonstrated leadership, patience and flexibility, putting the priority of health and well-being for student-athletes above all else.”

He is currently the longest-tenured head coach in the Pac-12 and third-longest among FBS schools.Whittingham is about to enter his 16th season leading the Utah football program. He’s been a member of the Utes’ coaching staff for the past 26 season.

Whittingham is No. 2 on Utah’s list for most wins in school history with a career record of 131-64.

In 2005, Whittingham and former Utah head coach Urban Meyer led the Utes to a Fiesta Bowl victory. Under Whittingham, Utah won the Sugar Bowl over Alabama in 2009.

Whittingham and the Utes open the 2020 season against the Arizona Wildcats on Saturday, November 7 at 1:30 p.m. (MDT). The game will broadcast on ESPN2.