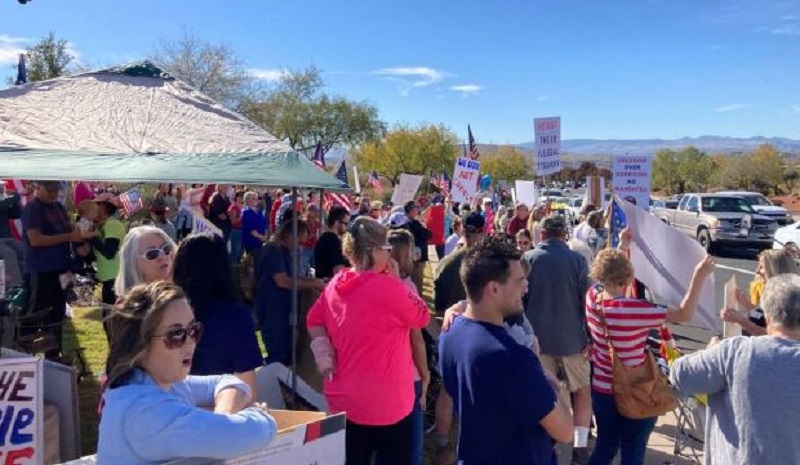 St. George, Utah – In order to show their opposition to President Biden’s vaccine mandates, a group of protesters gathered today in front of Dixie Regional Medical.

They held signs saying “No Medical Tyranny,” “Do Not Comply,” and “Coercion Is Not Consent” on them.

As they protested, they waved at supporters driving by honking their horns in solidarity.

Biden announced in September a federal mandate that states that companies with 100 employees or more are required to be vaccinated against COVID-19 by Jan. 4th or test weekly under government rules if they choose not to be vaccinated.

According to St. George radio station owner Jeff Jennings “It’s a protest against mandates and it’s for freedom of choice”, adding that organizers of today’s protest worked in conjunction with Intermountain HealthCare employees.

In response to the president’s mandates, Governor Spencer Cox issued a statement saying, “The President’s vaccine mandate for businesses is a serious mistake. It’s outside the authority of the federal government and, as public health experts have pointed out, it is likely to exacerbate and broaden public resistance to all vaccines, which may outweigh any marginal benefit in terms of increased population immunity.”

Lt. Gov. Henderson also expressed her opposition to Biden’s decision to make it a federal mandate while not opposing getting vaccinated, saying “We continue to strongly encourage Utahns to get vaccinated to protect themselves and their loved ones and to protect the hospital capacity that we all use. The vaccines are a miracle of science and represent the best way to end the pandemic, but a federal mandate is a heavy-handed overreach that will harden vaccine resistance and polarization. Workplace vaccination and testing policies should remain firmly the prerogative of business owners. We’re committed to fighting the mandate through every possible avenue.”