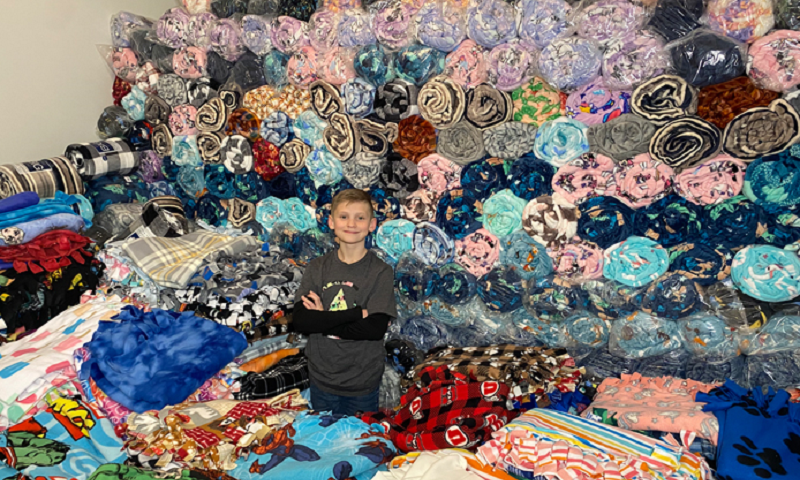 Lehi, Utah — A 12-year-old boy far surpassed his initial expectations in a blanket drive for a children’s hospital that spanned several months.

According to Caleb Konopka, his first goal was to make eight blankets for the 10-hour service project, but after doing so and speaking with a worker at Primary Children’s Hospital, he knew his work was far from finished.

“The person we were giving all the blankets to had said, ‘We only had eights blankets.’ So, when we found that out, I felt very bad,” the boy said.

The worker told Konopka the record donation to the hospital was 500 blankets.

“I was just like, ‘Man, then I’m going to get 501,’ and then I started going and I started making more blankets.”

According to Konopka, he received even more support from the community, helping him to complete and collect far more blankets than his new goal of 501.

“Well, due to the support of everybody, we wound up with 1,350 blankets,” Konopka beamed as he looked back at a white trailer loaded full of bags containing all the blankets.

He got the idea to donate blankets to the hospital after his older brother had a hospital stay when he was younger.

“He had gotten sick and was in the hospital for a week and he got a blanket and I found that to be pretty cool and I was jealous when I was younger,” Konopka said. “Now, I think of how cool that is, how he was able to get that comfort and warmth like you would have at home, so I just really wanted to help children out at the hospital, that they can feel that kind of warmth and braveness and courage.”

One man is dead after shooting at SLC gas station