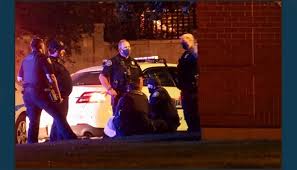 WEST VALLEY CITY, Utah — A man is in police custody on suspicion of starting a house on fire in West Valley City and the home may belong to a relative of the suspect.

When they arrived, flames and smoke were pouring from the home. They knocked down the fire in about 15 minutes.

Witnesses told police they saw a man running from the fire and hiding behind a nearby church.

Officers found that man at the church armed with a box cutter.

When he refused to comply with police commands, he was tased and taken into custody.

“All things considered, this was the best outcome that we could have had,” said Lt. Bill Merritt of the West Valley City Police Department. “I was there at the moment that he was tased, I was there to help take him into custody, and I can testify right now that the taser saved his life. Had we not had that taser I don’t believe pepper spray would have been effective on him. It’s very possible we would have ended up in a shooting.”

The suspect could face charges of aggravated arson and resisting arrest.

Woman who used taser on boy now in custody