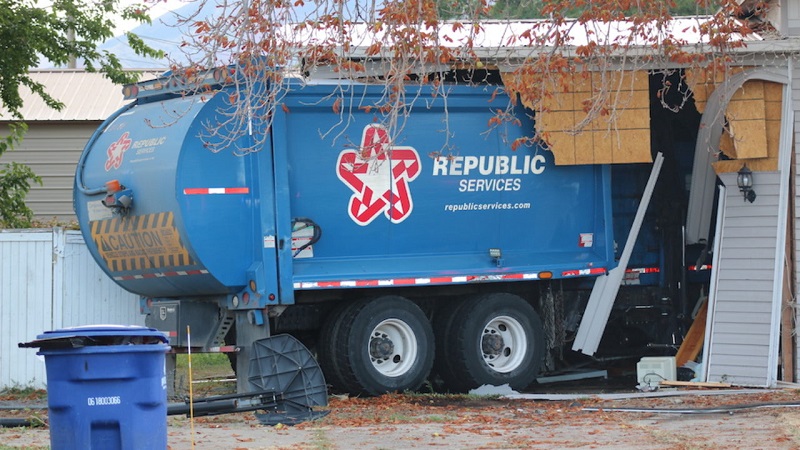 Spanish Fork, Utah – After a garbage truck crashed into their home early on Tuesday, three residents in Spanish Fork were unharmed.

Around 7:30 in the morning, the truck’s 58-year-old driver may have had a seizure, which caused him to veer off the road and crash into the house close to 300 North 200 East.

“I was getting ready for work. I had just gone and fed my cats and went back to my bedroom, and within five minutes I just heard this loud, thundering sound,” said homeowner Daniel Raith.

The sound Raith heard was the garbage truck. “I saw the cab of a garbage truck sitting in my dining room,” he explained. “The wheels were still spinning out the truck and were creating a big cloud of smoke everywhere.”

Raith was at home with his husband, their roommate, and three cats when the accident occurred. When the truck crashed through, the couple’s two dogs were outdoors.”I’m in shock. I look at that and I just, I just feel numb right now, that’s my home,” said Raith.

After observing the tragedy, neighbors in the area, including one who was driving home, were astounded as well.”I pulled over as soon as I saw him going directly into the home, he kind of went over the ditch right here, so that’s when I knew something was up,” explained Byron Lopez.

Lopez claimed the cops showed up on the scene shortly after he dialed 911.

Although nobody was hurt inside the house, there is substantial damage.”The dining room is in shambles, furniture everywhere, bricks are everywhere from the wall,” said Raith.

Raith claimed that soon before the garbage truck crashed in, he was in his kitchen.”I’m counting my lucky stars right now.”

As they search for a longer-term solution while waiting for the house to be fixed, the American Red Cross said it will assist Raith and the other two residents of the home in finding a place to live.

Candidates in Utah receive ratings from the “Dignity Index”